The Market Cap For Cryptocurrencies Surpasses A Staggering $2 trillion – 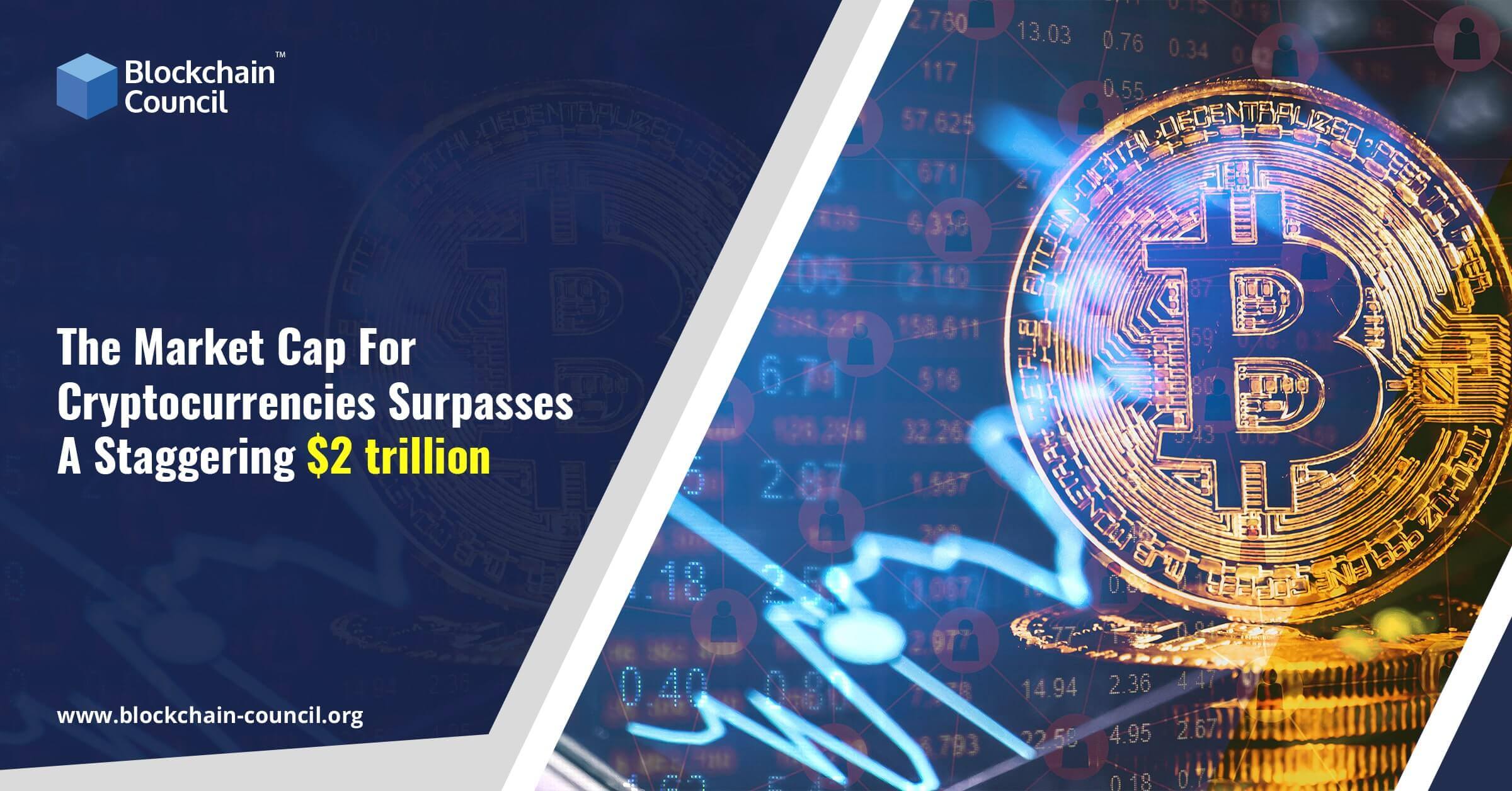 The previous week has been an excellent one for the cryptocurrencies such as Bitcoin and other altcoins as once again, they rallied past the point and together they pushed the global market capitalization of cryptocurrencies way above two trillion dollars point.

According to Coingecko, the largest independent cryptocurrency data aggregator in the whole world, at the time of publishing the news just a few hours back, the total market capitalization of cryptocurrencies was standing at a whopping $ 2.05 trillion, which according to data has been observed that it went up by almost 1.5 percent only in the recent 24 hours. The most dominant cryptocurrency in the world, Bitcoin, went high by more than 42.2 percent. On the other hand, the second-biggest cryptocurrency by market cap, Ethereum dominated with a percentage of 18.3.

The recent upsurge in the cryptocurrency market capitalization which took the market by storm is believed to be caused by a combination of certain factors. However, one of the key factors because of which this upsurge had taken place was the sudden hike in prices of some of the digital assets.

Bitcoin and Ethereum being the most popular of the cryptocurrencies have made incredible developments over the last week and there is no amount of doubt regarding that fact. However, apart from these two well-known cryptocurrencies, there are several other cryptocurrencies that are quite popular. Even though they are at their nascent stage, they do convey promising aspects. Digital assets such as Solana (SOL), Ripple (XRP), Cardano (ADA), and Terra (LUNA) are such coming of age cryptocurrencies that have recorded mammoth growth over the span of the last seven days.

As we all know, Bitcoin has been going through a period of a downward trend for the past few months leading investors and experts to guess and making predictive analyses about how the coin would make a comeback. However over the course of the previous week, much to the relief of experts and investors, the cryptocurrency has shot up to a price as high as $ 48,152, which is the highest level reached by the crypto since the month of May, when the crypto started to fall gradually. Bitcoin literally showed that it can sustain a resistance power of above its moving average of 200 days.

Other tokens also performed really well, almost surpassing the expectations of many experts, critics, and investors alike. Cryptocurrencies such as Solana (SOL), Cardano (ADA), and Ripple (XRP) were up by almost 78 percent, 47 percent, and 57 percent respectively. These are relatively newer cryptos in the market and nobody was expecting them to do so well.

It is worth mentioning that the market cap for the crypto industry had reached the $2 trillion mark this year back in the month of May on the 17th. After a period of slight turmoil in the past couple of months, the market cap has again hit the $2 trillion mark. Earlier in 2021, around the month of May, the market cap had reached a peak of $2.5 trillion but the following two months were not so lucky, as the downward trend had seen the crypto market cap touch as low as $1.19 trillion as well, on the 20th of July. However, things are looking far better now and the investors are gearing up for another bull run.

Even though the crypto market is steadily regaining momentum as the market is surging once again, it is important to note that there are still plenty of challenges and hurdles that the industry is facing, especially in relation to the infrastructure bill of the United States and the crackdowns that are taking place over crypto mining issues, song various other issues.

Quite recently, the cryptocurrency ecosystem suffered a temporary defeat when it failed to transform the tax reporting rules in the United States in respect to rules of making payments through digital currency or any such digital assets. On the other hand, China along with some other countries has been maintaining an intensified approach towards cryptocurrency mining and in turn the miners as well, citing environmental concerns. The Sichuan province in China which is mainly rich in hydropower ruled out the mining of cryptocurrencies forcing the miners to flee elsewhere. Even Beijing ordered a clampdown on miners citing concerns regarding the environment.

The earlier week has been a superb one for the cryptocurrencies similar to Bitcoin and different altcoins as as soon as once more, they rallied previous the purpose and collectively they pushed the worldwide market capitalization of cryptocurrencies manner above two trillion {dollars} level.

Based on Coingecko, the biggest unbiased cryptocurrency knowledge aggregator in the entire world, on the time of publishing the information just some hours again, the whole market capitalization of cryptocurrencies was standing at a whopping $ 2.05 trillion, which in keeping with knowledge has been noticed that it went up by nearly 1.5 % solely within the current 24 hours. Probably the most dominant cryptocurrency on the planet, Bitcoin, went excessive by greater than 42.2 %. However, the second-biggest cryptocurrency by market cap, Ethereum dominated with a share of 18.3.

The current upsurge within the cryptocurrency market capitalization which took the market by storm is believed to be brought on by a mixture of sure components. Nevertheless, one of many key components due to which this upsurge had taken place was the sudden hike in costs of a number of the digital property.

Bitcoin and Ethereum being the most well-liked of the cryptocurrencies have made unbelievable developments over the past week and there’s no quantity of doubt concerning that reality. Nevertheless, aside from these two well-known cryptocurrencies, there are a number of different cryptocurrencies which are fairly standard. Despite the fact that they’re at their nascent stage, they do convey promising elements. Digital property similar to Solana (SOL), Ripple (XRP), Cardano (ADA), and Terra (LUNA) are such coming of age cryptocurrencies which have recorded mammoth progress over the span of the final seven days.

As everyone knows, Bitcoin has been going via a interval of a downward development for the previous few months main buyers and consultants to guess and making predictive analyses about how the coin would make a comeback. Nevertheless over the course of the earlier week, a lot to the reduction of consultants and buyers, the cryptocurrency has shot as much as a worth as excessive as $ 48,152, which is the very best stage reached by the crypto for the reason that month of Might, when the crypto began to fall steadily. Bitcoin actually confirmed that it will possibly maintain a resistance energy of above its transferring common of 200 days.

Different tokens additionally carried out rather well, nearly surpassing the expectations of many consultants, critics, and buyers alike. Cryptocurrencies similar to Solana (SOL), Cardano (ADA), and Ripple (XRP) had been up by nearly 78 %, 47 %, and 57 % respectively. These are comparatively newer cryptos out there and no person was anticipating them to take action effectively.

It’s value mentioning that the market cap for the crypto trade had reached the $2 trillion mark this 12 months again within the month of Might on the seventeenth. After a interval of slight turmoil up to now couple of months, the market cap has once more hit the $2 trillion mark. Earlier in 2021, across the month of Might, the market cap had reached a peak of $2.5 trillion however the next two months weren’t so fortunate, because the downward development had seen the crypto market cap contact as little as $1.19 trillion as effectively, on the twentieth of July. Nevertheless, issues are wanting much better now and the buyers are gearing up for an additional bull run.

The Crypto market continues to be dealing with challenges

Despite the fact that the crypto market is steadily regaining momentum because the market is surging as soon as once more, you will need to notice that there are nonetheless loads of challenges and hurdles that the trade is dealing with, particularly in relation to the infrastructure invoice of the USA and the crackdowns which are happening over crypto mining points, track varied different points.

Fairly lately, the cryptocurrency ecosystem suffered a brief defeat when it failed to rework the tax reporting guidelines in the USA in respect to guidelines of creating funds via digital foreign money or any such digital property. However, China together with another nations has been sustaining an intensified method in the direction of cryptocurrency mining and in flip the miners as effectively, citing environmental issues. The Sichuan province in China which is especially wealthy in hydropower dominated out the mining of cryptocurrencies forcing the miners to flee elsewhere. Even Beijing ordered a clampdown on miners citing issues concerning the setting.