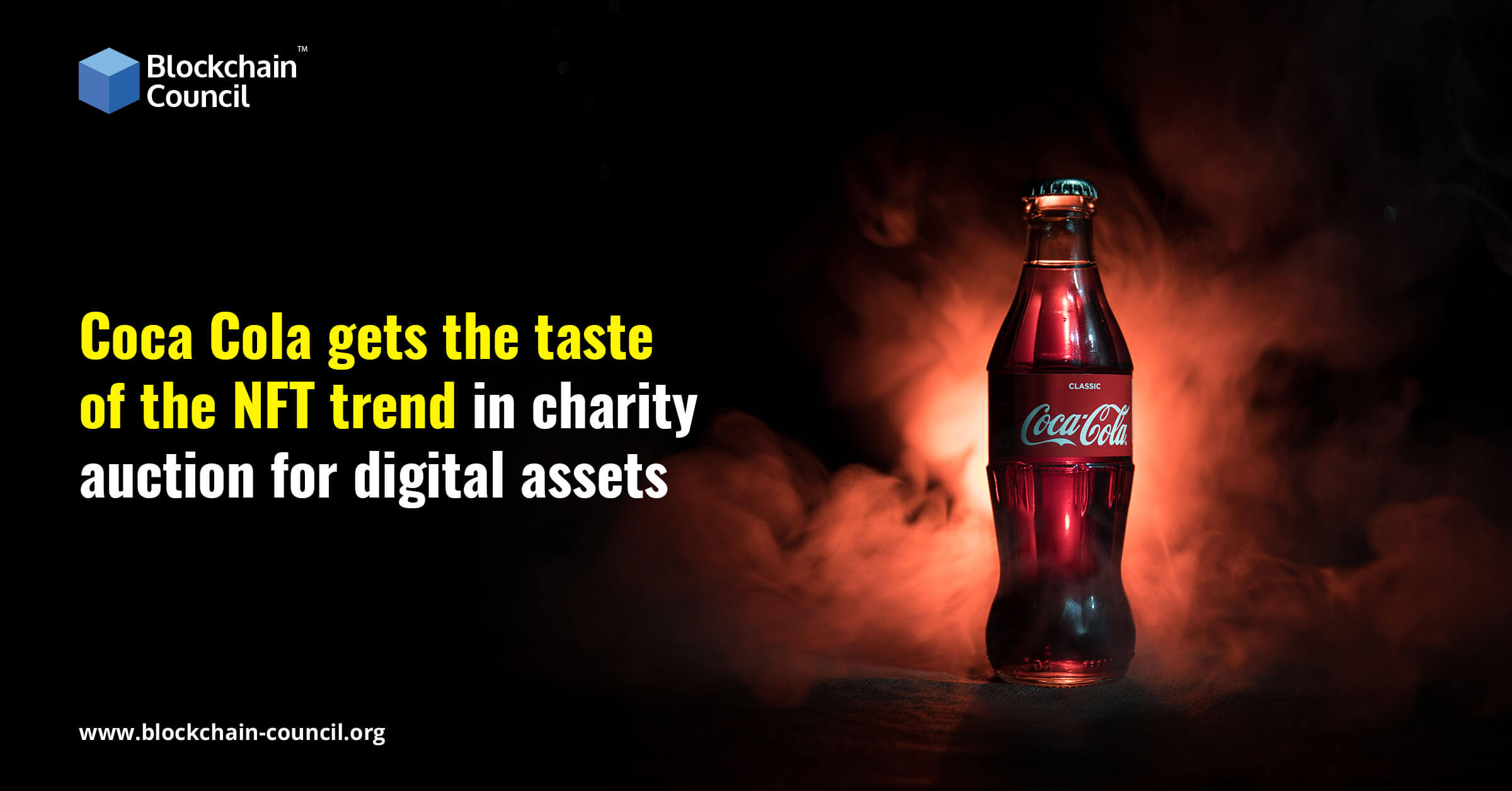 Coca-Cola is about to host an auction for one-of-a-kind, special edition virtual loot boxes of Non Fungible Tokens or NFTs, and for that they have teamed up with the 3D creators at Tafi. The profits that will be generated from the auction will be donated to the Special Olympics, an event that is dedicated to individuals with intellectual and physical disabilities and of which Coca-Cola has been a brand partner for a very long time.

Coca-Cola, the most popular soft beverage manufacturing company in the world, made an announcement today regarding their very first venture into the world of Non Fungible Tokens or NFTs. For this initiative, they have partnered with Tafi, a company specialising in creating 3D branded content and custom avatars.

In order to celebrate Friendship Day on the 30th of July, Coca-Cola plans to hold up for auction, a collection of virtual ‘loot boxes’ of NFTs, which are creatively constructed and designed by Tafi. The set contains digital apparels that can be adorned in an open-access 3D virtual reality platform that is also decentralized and is hosted on the Ethereum Blockchain. The name of this platform is Decentraland.

Josh Schwarber, who is the senior global digital design director for Coca-Cola, said that he is very excited about this entire NFT space that they are venturing into because of how new and unique it is and also he expressed that it is fun not to know what the loot boxes will actually contain. He added that this initiative has provided a pathway to celebrate the idea of friendship, with every single component having a unique expression.

During the event, participants will be able to bid on the Friendship Box from Coca-Cola, which is a virtual remake of the classic Coca-Cola vending machine. Upon opening, the box will reveal additional NFT goodies, along with a futuristic designed Cola Bubble Jacket in the brand’s iconic metallic red and brown colour. It will also contain The Friendship Card, which is a revamped version of the friendship cards produced by Coca-Cola in the 1940s and The Sound Visualizer, which is basically designed to engage users with the long familiar sound of a bottle cap being opened and the fizz of the Cola pouring over the ice. The winner will have the opportunity to access additional digital collectibles once he or she opens the box.

According to Schwarber, Coca-Cola has always been able to bring people together through their brand awareness and this time in order to celebrate the International Friendship Day, they stumbled upon the idea of a ‘surprise and delight’ Friendship Box combined with the use of non fungible tokens. He added that they have made use of some of the most iconic properties associated with Coca-cola and reimagined them with motion and other sensorial expressions for the metaverse. He stated that these ideas combined together quickly came to have its own life and vigour, ultimately turning out to be something that feels appropriate for Coca-Cola and moreover since the NFTs are interactive and sensory, they can be enjoyed over and over again.

Meanwhile the Tafi team agreed that this collaboration perfectly fits the spirit of the brand. Ty Duperron, who is the chief operating officer of Tafi, said that Coca-Cola is a historic brand around the world, and keeping in mind the idea of collectible memorabilia, the step towards NFTs seems like a natural and right decision given the times we are living in. According to him, this is definitely a step forward in the right direction.

Coca-Cola is the latest in a long line of brands who are actually getting to experience the so-called ‘metaverse’, which is a virtual space lingering at the intersection of the physical and the digital world. The convergence of new technologies like that of augmented and virtual reality, blockchain and gaming are driving these innovations which is creating numerous opportunities for experiential brand marketing. According to Schwarber, this metaverse which is basically without borders and is entirely geo-less, creates a fascinating opportunity to connect with people in a unique way, and Coca-Cola would love to be a player in this domain.

Since the year 1968, Coca-Cola has been an avid supporter of the cause for theSpecial Olympics, which is an event for specially challenged individuals, kids and adults alike. The profits generated from the auction will be given as a charity donation to the Special Olympics authorities. James Quincey, who is the chairman and the chief executive officer of Coca-Cola is also a member of the Special Olympics Board of Directors. He sits alongside his predecessor Muhtar Kent.

The auction will commence from 30th July at 12.01 am UTC and continue till 2nd August till 8 pm UTC, on OpenSea, which is a peer-to-peer NFT marketplace for digital collectibles.

Coca-Cola is about to host an public sale for one-of-a-kind, particular version digital loot bins of Non Fungible Tokens or NFTs, and for that they’ve teamed up with the 3D creators at Tafi. The earnings that will likely be generated from the public sale will likely be donated to the Particular Olympics, an occasion that’s devoted to people with mental and bodily disabilities and of which Coca-Cola has been a model accomplice for a really very long time.

Coca-Cola, the most well-liked mushy beverage manufacturing firm on the earth, made an announcement as we speak concerning their very first enterprise into the world of Non Fungible Tokens or NFTs. For this initiative, they’ve partnered with Tafi, an organization specialising in creating 3D branded content material and customized avatars.

With a view to have fun Friendship Day on the thirtieth of July, Coca-Cola plans to carry up for public sale, a group of digital ‘loot bins’ of NFTs, that are creatively constructed and designed by Tafi. The set accommodates digital apparels that may be adorned in an open-access 3D digital actuality platform that can be decentralized and is hosted on the Ethereum Blockchain. The identify of this platform is Decentraland.

Josh Schwarber, who’s the senior world digital design director for Coca-Cola, stated that he’s very enthusiastic about this whole NFT area that they’re venturing into due to how new and distinctive it’s and likewise he expressed that it’s enjoyable to not know what the loot bins will truly comprise. He added that this initiative has offered a pathway to have fun the thought of friendship, with each single part having a novel expression.

Through the occasion, individuals will be capable to bid on the Friendship Field from Coca-Cola, which is a digital remake of the traditional Coca-Cola merchandising machine. Upon opening, the field will reveal further NFT goodies, together with a futuristic designed Cola Bubble Jacket within the model’s iconic metallic purple and brown color. It would additionally comprise The Friendship Card, which is a revamped model of the friendship playing cards produced by Coca-Cola within the Nineteen Forties and The Sound Visualizer, which is mainly designed to have interaction customers with the lengthy acquainted sound of a bottle cap being opened and the fizz of the Cola pouring over the ice. The winner could have the chance to entry further digital collectibles as soon as she or he opens the field.

Based on Schwarber, Coca-Cola has at all times been capable of carry folks collectively by their model consciousness and this time with a view to have fun the Worldwide Friendship Day, they stumbled upon the thought of a ‘shock and delight’ Friendship Field mixed with using non fungible tokens. He added that they’ve made use of a number of the most iconic properties related to Coca-cola and reimagined them with movement and different sensorial expressions for the metaverse. He said that these concepts mixed collectively shortly got here to have its personal life and vigour, in the end turning out to be one thing that feels acceptable for Coca-Cola and furthermore because the NFTs are interactive and sensory, they are often loved again and again.

In the meantime the Tafi workforce agreed that this collaboration completely matches the spirit of the model. Ty Duperron, who’s the chief working officer of Tafi, stated that Coca-Cola is a historic model around the globe, and holding in thoughts the thought of collectible memorabilia, the step in the direction of NFTs looks like a pure and proper resolution given the occasions we live in. Based on him, that is undoubtedly a step ahead in the suitable path.

Coca-Cola is the newest in an extended line of manufacturers who’re truly attending to expertise the so-called ‘metaverse’, which is a digital area lingering on the intersection of the bodily and the digital world. The convergence of recent applied sciences like that of augmented and digital actuality, blockchain and gaming are driving these improvements which is creating quite a few alternatives for experiential model advertising and marketing. Based on Schwarber, this metaverse which is mainly with out borders and is totally geo-less, creates a captivating alternative to attach with folks in a novel manner, and Coca-Cola would like to be a participant on this area.

For the reason that 12 months 1968, Coca-Cola has been an avid supporter of the trigger for theSpecial Olympics, which is an occasion for specifically challenged people, youngsters and adults alike. The earnings generated from the public sale will likely be given as a charity donation to the Particular Olympics authorities. James Quincey, who’s the chairman and the chief government officer of Coca-Cola can be a member of the Particular Olympics Board of Administrators. He sits alongside his predecessor Muhtar Kent.

The public sale will start from thirtieth July at 12.01 am UTC and proceed until 2nd August until 8 pm UTC, on OpenSea, which is a peer-to-peer NFT market for digital collectibles.