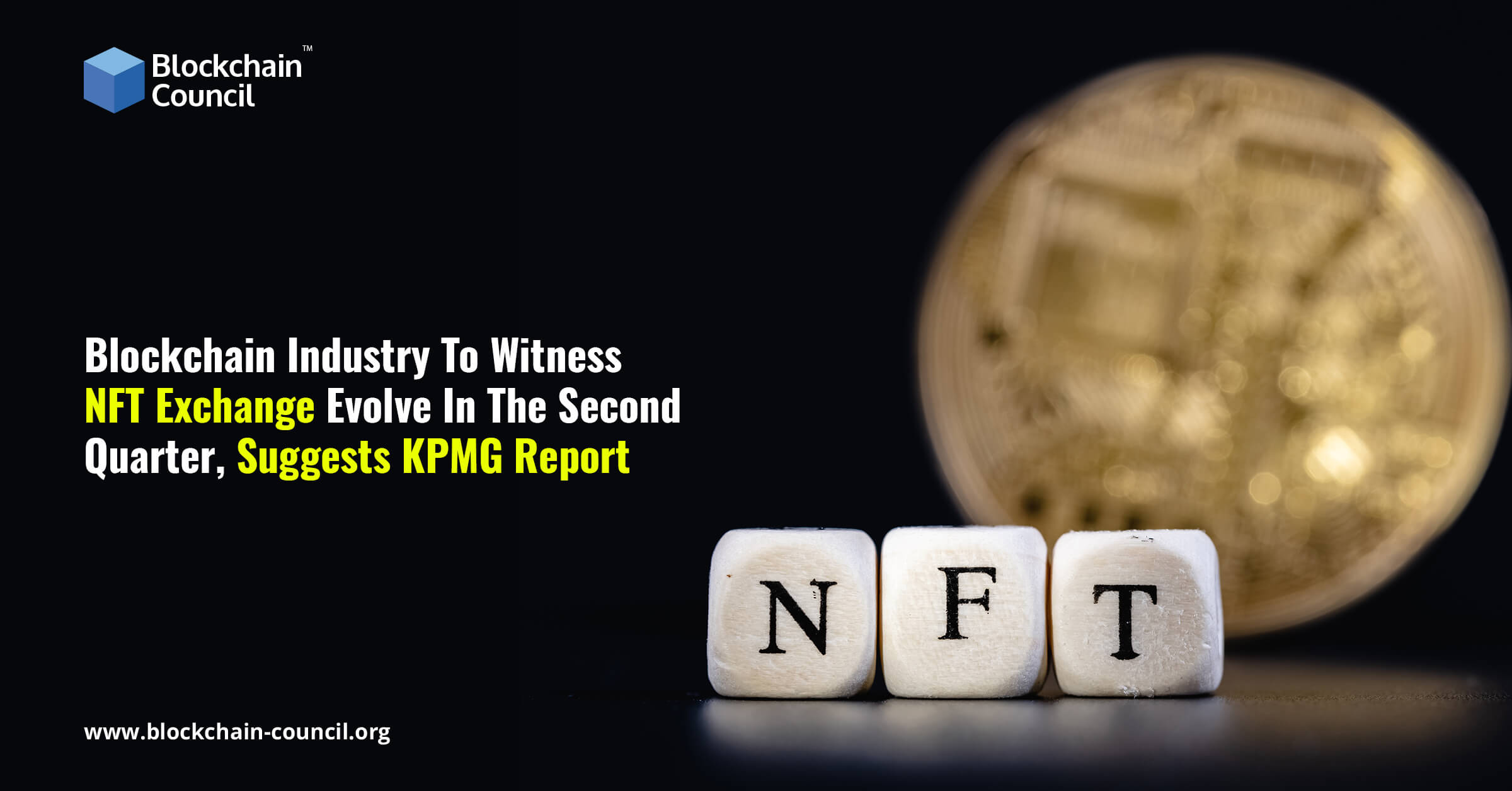 Blockchain technology was introduced in the market in the form of cryptocurrencies and gradually the world is getting to know the benefits and potential of both the application and implication of this technology which is still considered to be in its nascent stage. With the introduction of Non Fungible Tokens or NFTs, the global face of digital art and collectibles have undergone a revolution. Even a few years back, nobody had the faintest idea that a technology named Blockchain can transform the way we interact with each other, conduct our businesses or even possess the ability to perceive the world of art and entertainment in such a manner.

Over the course of the past year alone, the entire ecosystem of digital currencies has witnessed a massive influx of investments from institutional investors around the world. This statement has been further corroborated by a new report that came from none other than KPMG, one of the Big Fours, who suggested that the ecosystem surrounding cryptocurrencies got heated up during the initial half of this year with high volume transactions being recorded. They also mentioned that this increased rate of growth that has been witnessed in the first half of the year amounts to more than twice the level of growth that was witnessed in the previous year, 2020. Needless to say, the present growth simply soars past the annual record it had set during the year 2018.

According to the report, the maturity and development of the cryptocurrency and blockchain ecosystem have had quite an effect on those who understand and in turn, invest in this ecosystem. The report suggests that during the first half of 2021, a significant amount of money has been invested in the crypto space which in turn had a direct impact on the investor base which increased exponentially.

The report further suggests that the awareness and overall knowledge and understanding of the entire blockchain and crypto ecosystem from the perspective of the investors are growing on a daily basis and the investors nowadays are a lot more aware of the ecosystem and their understanding is more profound about not only crypto assets but also about the procedural and the operational aspects of cryptocurrencies. These aspects of crypto entail activities that range from the custody of the crypto to the storage and storekeeping of the same. It also involves the activities that showcase the maturity of the service providers, along with how competitive they actually are.

Venture Capital Firms and their role

As the regulatory policies and scrutiny increases around crypto products and services, investments made by the institutional investors have slowed down a bit if compared to how it was a few years before. However, it can also be seen that the venture capitalists are taking major interest in the field of cryptocurrencies and other blockchain-based products and companies who are providing services across both these areas and are investing huge amounts of money in these companies.

Among the big names that made headlines after receiving such giant investments in the crypto domain, one such name is Messari, a crypto service providing company that gathered an investment of an estimated amount of $21 million during the earlier part of this month itself. Another major company that raised a staggering amount of money through investments from venture capital funds, is BlockFi. They have raised an enormous amount of investment amounting to an estimated $350 million which is then followed by companies such as Blockchain.com and so on.

The funding is taking place across various sections of the Blockchain and Cryptocurrency ecosystem, ranging from crypto exchange platforms to lending services as well. Just recently a company named Lolli, which is basically a Bitcoin rewarding app managed to raise a whopping $10 million in the month of July through a series A funding event.

Predictions for the second half: Emergence of NFT Exchanges

The KPMG report on the entire evolving crypto and blockchain ecosystem concluded with a prediction or an analyzed projection of the ecosystem in terms of the trends that are about to follow throughout the rest of the year. The reports suggest that gradually we are about to witness a steady level of maturity of the entire cryptocurrency space that will eventually lead to such a state when cryptocurrencies will be further separated from blockchain in terms of their usability and applications.

Blockchain know-how was launched available in the market within the type of cryptocurrencies and steadily the world is attending to know the advantages and potential of each the applying and implication of this know-how which continues to be thought-about to be in its nascent stage. With the introduction of Non Fungible Tokens or NFTs, the worldwide face of digital artwork and collectibles have undergone a revolution. Even a couple of years again, no one had the faintest thought {that a} know-how named Blockchain can remodel the way in which we work together with one another, conduct our companies and even possess the power to understand the world of artwork and leisure in such a fashion.

Over the course of the previous 12 months alone, your complete ecosystem of digital currencies has witnessed a large inflow of investments from institutional buyers all over the world. This assertion has been additional corroborated by a brand new report that got here from none apart from KPMG, one of many Massive Fours, who prompt that the ecosystem surrounding cryptocurrencies received heated up through the preliminary half of this 12 months with excessive quantity transactions being recorded. Additionally they talked about that this elevated fee of progress that has been witnessed within the first half of the 12 months quantities to greater than twice the extent of progress that was witnessed within the earlier 12 months, 2020. For sure, the current progress merely soars previous the annual report it had set through the 12 months 2018.

Based on the report, the maturity and improvement of the cryptocurrency and blockchain ecosystem have had fairly an impact on those that perceive and in flip, make investments on this ecosystem. The report means that through the first half of 2021, a big amount of cash has been invested within the crypto area which in flip had a direct influence on the investor base which elevated exponentially.

The report additional means that the attention and total data and understanding of your complete blockchain and crypto ecosystem from the angle of the buyers are rising each day and the buyers these days are much more conscious of the ecosystem and their understanding is extra profound about not solely crypto property but additionally concerning the procedural and the operational facets of cryptocurrencies. These facets of crypto entail actions that vary from the custody of the crypto to the storage and storekeeping of the identical. It additionally entails the actions that showcase the maturity of the service suppliers, together with how aggressive they really are.

Enterprise Capital Companies and their position

Because the regulatory insurance policies and scrutiny will increase round crypto services, investments made by the institutional buyers have slowed down a bit if in comparison with the way it was a couple of years earlier than. Nonetheless, it may also be seen that the enterprise capitalists are taking main curiosity within the subject of cryptocurrencies and different blockchain-based merchandise and firms who’re offering providers throughout each these areas and are investing large quantities of cash in these firms.

Among the many massive names that made headlines after receiving such big investments within the crypto area, one such identify is Messari, a crypto service offering firm that gathered an funding of an estimated quantity of $21 million through the earlier a part of this month itself. One other main firm that raised a staggering amount of cash by way of investments from enterprise capital funds, is BlockFi. They’ve raised an unlimited quantity of funding amounting to an estimated $350 million which is then adopted by firms corresponding to Blockchain.com and so forth.

The funding is happening throughout numerous sections of the Blockchain and Cryptocurrency ecosystem, starting from crypto trade platforms to lending providers as nicely. Only recently an organization named Lolli, which is mainly a Bitcoin rewarding app managed to lift a whopping $10 million within the month of July by way of a collection A funding occasion.

Predictions for the second half: Emergence of NFT Exchanges

The KPMG report on your complete evolving crypto and blockchain ecosystem concluded with a prediction or an analyzed projection of the ecosystem by way of the developments which are about to observe all through the remainder of the 12 months. The experiences recommend that steadily we’re about to witness a gradual stage of maturity of your complete cryptocurrency area that may finally result in such a state when cryptocurrencies might be additional separated from blockchain by way of their usability and functions.