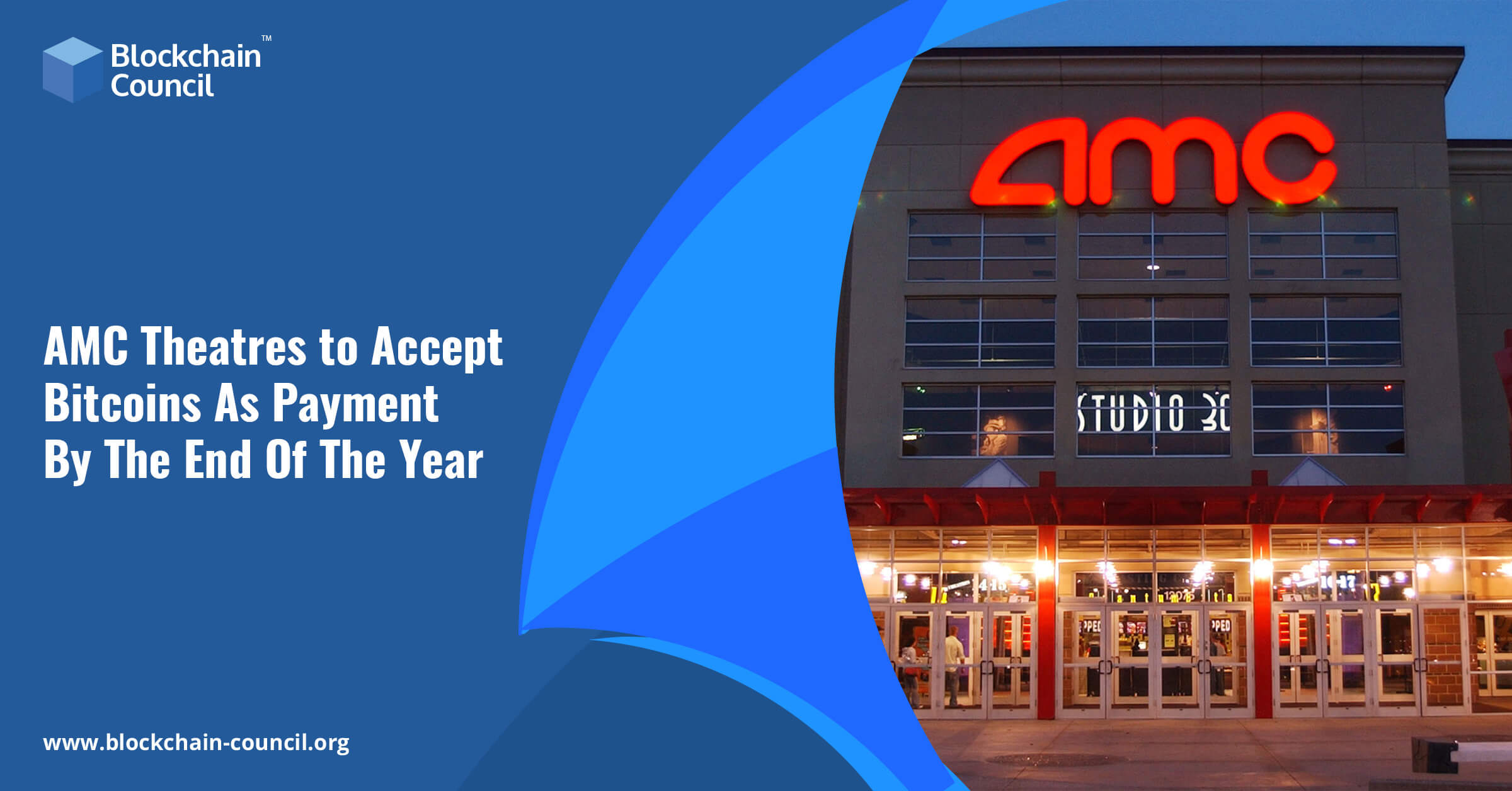 Adam Aron who is the Chief Executive Officer of the famed AMC Theatres announced on a quarterly earnings call that the company is busy in setting up an entire IT logistics division that will focus on a support system that will be able to accept payments made through Bitcoins. It is expected that before the end of this year, Cryptocurrencies will become an accepted mode of payments in the AMC Theatres.

Aron mentioned that from this year, the theatre chain is more than willing to accept payments in bitcoins for both movie tickets and also for concessions. This initiative can be understood as a conglomeration of two notable investments that have been making headlines all year round. Bitcoin is by far, believed to be the leading asset in the broader cryptocurrency domain.

On the other hand, AMC has been a company that had stocks that were grouped with those of Gamestop ($GME) which belonged to the r/WallStreetBets Saga in Reddit this year. It was during this period of revitalization that the AMC stocks were surging over 1000 percent.

The quarterly earnings report that was released this week, revealed that the predictive numbers for the company were far better than it was expected previously. This included the expected earnings from revenues according to the predictions of the analysts, which of course were surpassed by miles. Also the firm had expected losses in the quarterly report and estimated them at a range of $0.91. However the reports of losses that came around, showed that losses stood at $0.71 per share which was only an indicator of the company doing well beyond prediction.

The Covid-19 pandemic had turned out to be a nightmare for the entertainment industry, especially for the theatre owners. Every single theatre was closed down and the public shifted more towards the online platforms. However as the situation is slightly under control now, authorities are slowly lifting bans in a calculated manner to bring back normalcy in our lives.

By the end of June this year, all the theatres under AMC received permission for opening up in the locations in and around the United States and an estimated 95 percent of the theatres in the international locations opened up as well. It has been reported that the theatre company had catered to almost 22 million guests in the second quarter of the year, which is tremendous.

Given how promising the data is, Aron seemed really hopeful about the fact that he believes that the fourth quarter of the year would be the one when they would finally be able to see the company generating some real profits. Most of the films that were scheduled to release last year have been rescheduled for release this year including ones that are assured blockbusters and real crowd-pullers which will draw audiences to the theatres once again.

AMC is also planning to venture into exploring some new content as well such as live concerts of greatest bands and singers that were recorded previously. The content section would also feature sports which do attract a lot of people in general. Moreover, apart from the initiative of integrating Bitcoins, AMC is also planning to integrate with Google Pay and Apple Pay for their payment services.

After having made this announcement, AMC shares have suddenly jumped up 3 percent.

Through this initiative, AMC theatres have joined the long list of companies that are integrating with and implementing cryptocurrencies such as Bitcoin, Ethereum and others in their businesses in more than one way and these companies are generally publicly traded. We have all seen examples of such when Tesla, owned by Elon Musk, whom some refer to as the ‘Dodge King’, started accepting payments in Bitcoins before during the middle of May he had suddenly stopped doing so, because of the adverse effect the entire mining process of Bitcoin was having on the environment.

However, with the implementation and use of clean energy resources for mining, these concerns have been addressed as much as they could have been by now. As a result Musk has declared that he will reconsider his decision and just may start accepting Bitcoin payments all over again.

Moreover we have seen how fintech startups and companies have started adopting cryptocurrencies a lot more than previously. Companies like PayPal are integrating cryptocurrencies for payments and other services and startups like Microstrategy and Square are investing heavily in crypto as well. Elon Musk, the owner of Tesla and SpaceX recently reported that he may reportedly own a staggering number of around 42,000 Bitcoins himself.

Global brands such as Coca-Cola, Lamborghini, Audi, Gucci and so many others have also joined the crypto revolution by launching their Non Fungible Token collections which are globally available online.

Hence AMC believes that they are headed in the right direction by adopting a crypto strategy for the future and they may also open up newer opportunities along with further developments in this domain.

Adam Aron who’s the Chief Government Officer of the famed AMC Theatres introduced on a quarterly earnings name that the corporate is busy in establishing a whole IT logistics division that can give attention to a assist system that can be capable of settle for funds made by way of Bitcoins. It’s anticipated that earlier than the tip of this yr, Cryptocurrencies will turn out to be an accepted mode of funds within the AMC Theatres.

Aron talked about that from this yr, the theatre chain is greater than prepared to simply accept funds in bitcoins for each film tickets and in addition for concessions. This initiative will be understood as a conglomeration of two notable investments which have been making headlines all yr spherical. Bitcoin is by far, believed to be the main asset within the broader cryptocurrency area.

Alternatively, AMC has been an organization that had shares that had been grouped with these of Gamestop ($GME) which belonged to the r/WallStreetBets Saga in Reddit this yr. It was throughout this era of revitalization that the AMC shares had been surging over 1000 p.c.

The quarterly earnings report that was launched this week, revealed that the predictive numbers for the corporate had been much better than it was anticipated beforehand. This included the anticipated earnings from revenues in line with the predictions of the analysts, which after all had been surpassed by miles. Additionally the agency had anticipated losses within the quarterly report and estimated them at a spread of $0.91. Nonetheless the studies of losses that got here round, confirmed that losses stood at $0.71 per share which was solely an indicator of the corporate doing properly past prediction.

The Covid-19 pandemic had turned out to be a nightmare for the leisure business, particularly for the theatre house owners. Each single theatre was closed down and the general public shifted extra in direction of the net platforms. Nonetheless because the scenario is just below management now, authorities are slowly lifting bans in a calculated method to carry again normalcy in our lives.

By the tip of June this yr, all of the theatres below AMC obtained permission for opening up within the places in and round the US and an estimated 95 p.c of the theatres within the worldwide places opened up as properly. It has been reported that the theatre firm had catered to nearly 22 million company within the second quarter of the yr, which is super.

Given how promising the information is, Aron appeared actually hopeful about the truth that he believes that the fourth quarter of the yr could be the one after they would lastly be capable of see the corporate producing some actual income. A lot of the movies that had been scheduled to launch final yr have been rescheduled for launch this yr together with ones which can be assured blockbusters and actual crowd-pullers which can draw audiences to the theatres as soon as once more.

AMC can be planning to enterprise into exploring some new content material as properly equivalent to dwell live shows of biggest bands and singers that had been recorded beforehand. The content material part would additionally function sports activities which do appeal to lots of people basically. Furthermore, aside from the initiative of integrating Bitcoins, AMC can be planning to combine with Google Pay and Apple Pay for his or her cost companies.

After having made this announcement, AMC shares have all of a sudden jumped up 3 p.c.

By this initiative, AMC theatres have joined the lengthy checklist of firms which can be integrating with and implementing cryptocurrencies equivalent to Bitcoin, Ethereum and others of their companies in a couple of method and these firms are usually publicly traded. We’ve all seen examples of such when Tesla, owned by Elon Musk, whom some seek advice from because the ‘Dodge King’, began accepting funds in Bitcoins earlier than through the center of Might he had all of a sudden stopped doing so, due to the opposed impact the whole mining means of Bitcoin was having on the atmosphere.

Nonetheless, with the implementation and use of unpolluted power sources for mining, these considerations have been addressed as a lot as they might have been by now. In consequence Musk has declared that he’ll rethink his resolution and simply might begin accepting Bitcoin funds over again.

Furthermore we have now seen how fintech startups and corporations have began adopting cryptocurrencies much more than beforehand. Corporations like PayPal are integrating cryptocurrencies for funds and different companies and startups like Microstrategy and Sq. are investing closely in crypto as properly. Elon Musk, the proprietor of Tesla and SpaceX not too long ago reported that he might reportedly personal a staggering variety of round 42,000 Bitcoins himself.

World manufacturers equivalent to Coca-Cola, Lamborghini, Audi, Gucci and so many others have additionally joined the crypto revolution by launching their Non Fungible Token collections that are globally obtainable on-line.

Therefore AMC believes that they’re headed in the suitable course by adopting a crypto technique for the long run they usually may additionally open up newer alternatives together with additional developments on this area.